On August 16th, 2003, a lightning strike across the lake from Peachland near Rattlesnake Island unleashed the Okanagan Mountain Fire. This book contains images over the course of the fire, including many, which have never been published before.

Available for free in eBook format…with even more images!  Get it from the iBookstore. 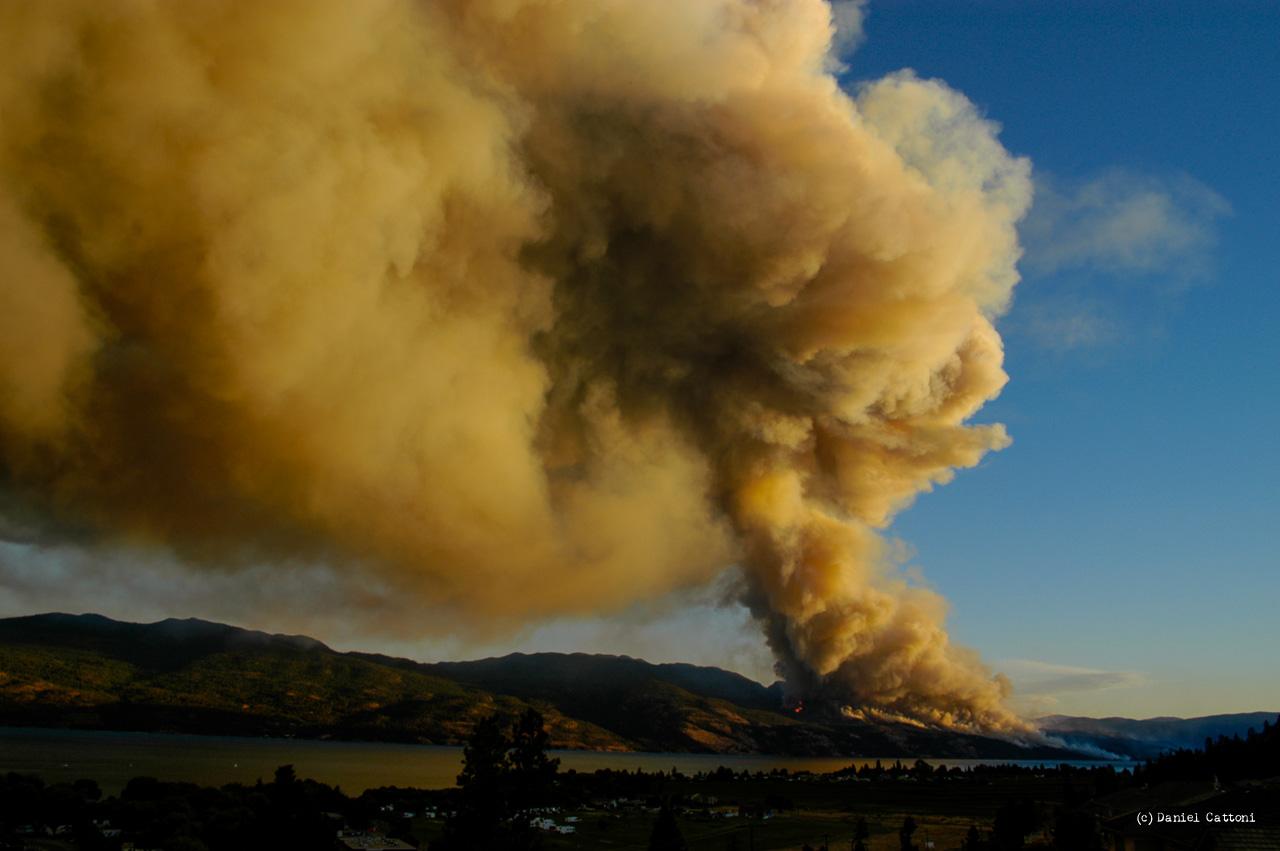 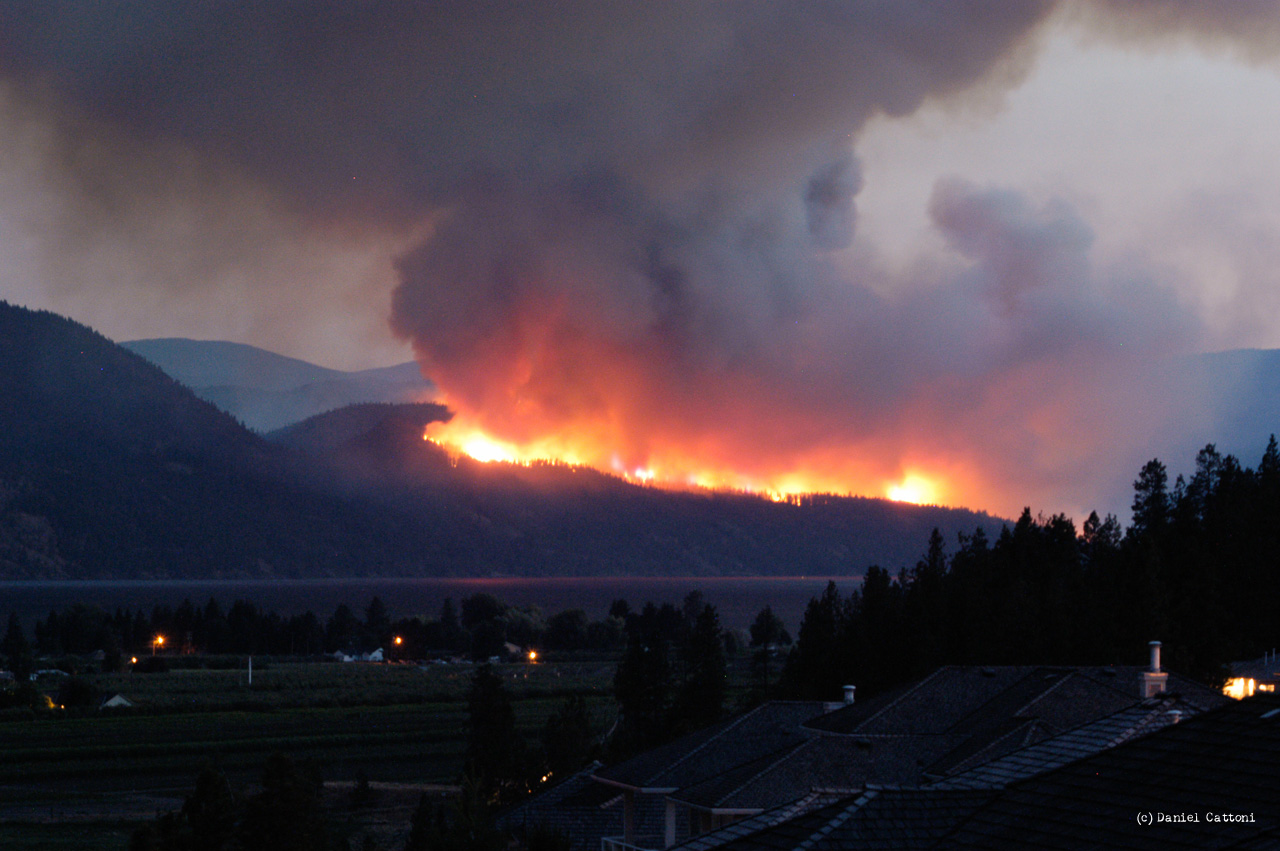 August 16th, 2003 – 19:42 PST
The fire has already progressed away from Squally Point near Rattlesnake Island. 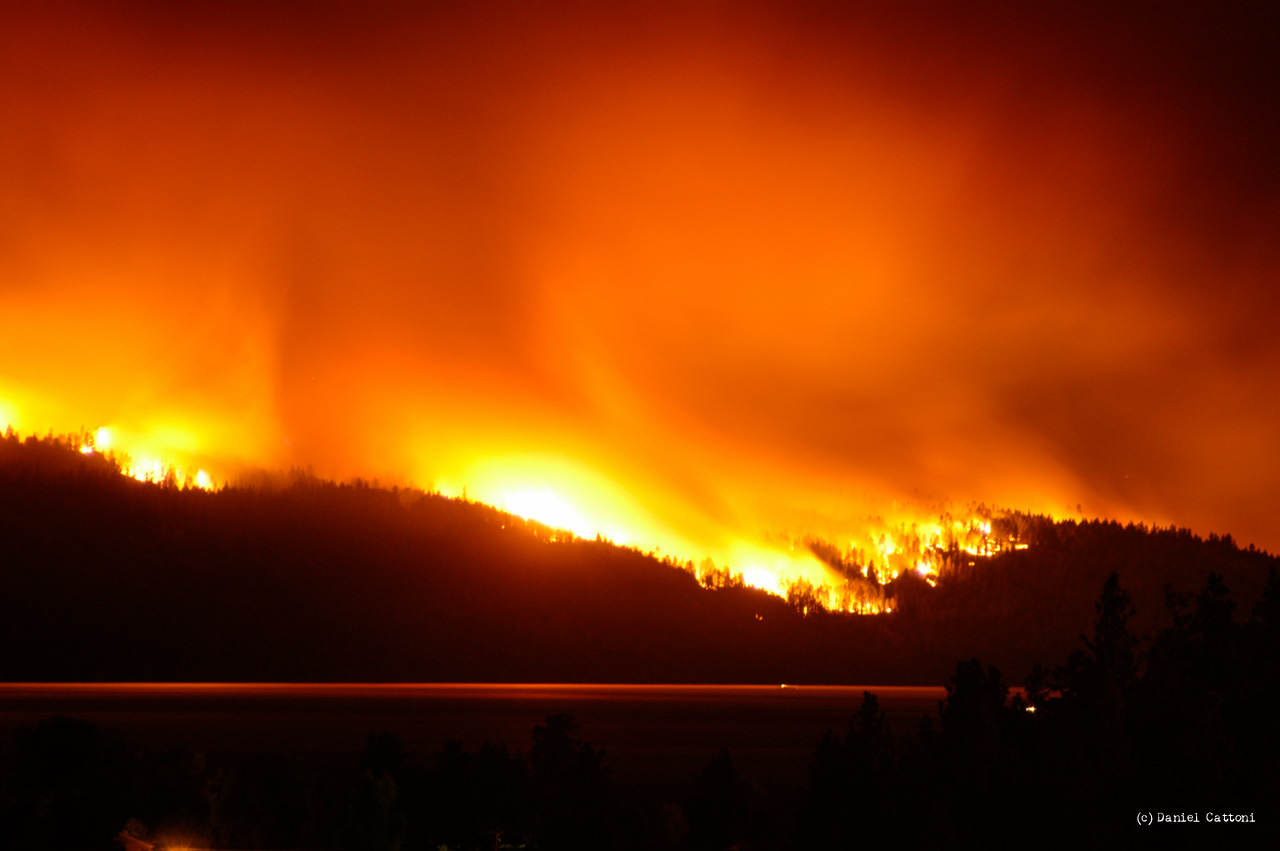 The above panoramic picture was stitched from 5 smaller individual pictures. To explore it in high resolution, zoom in and out, and pan, >>> click here to open in new window. 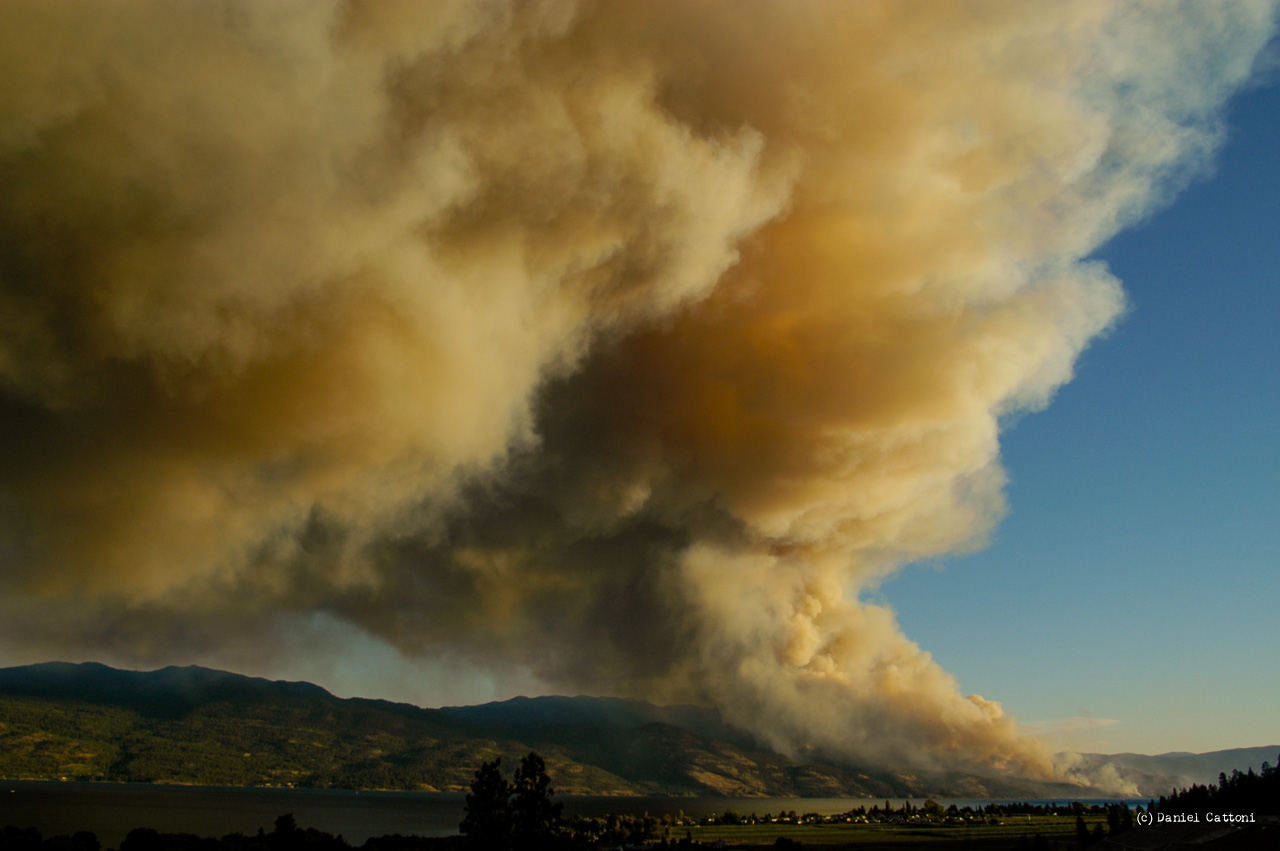 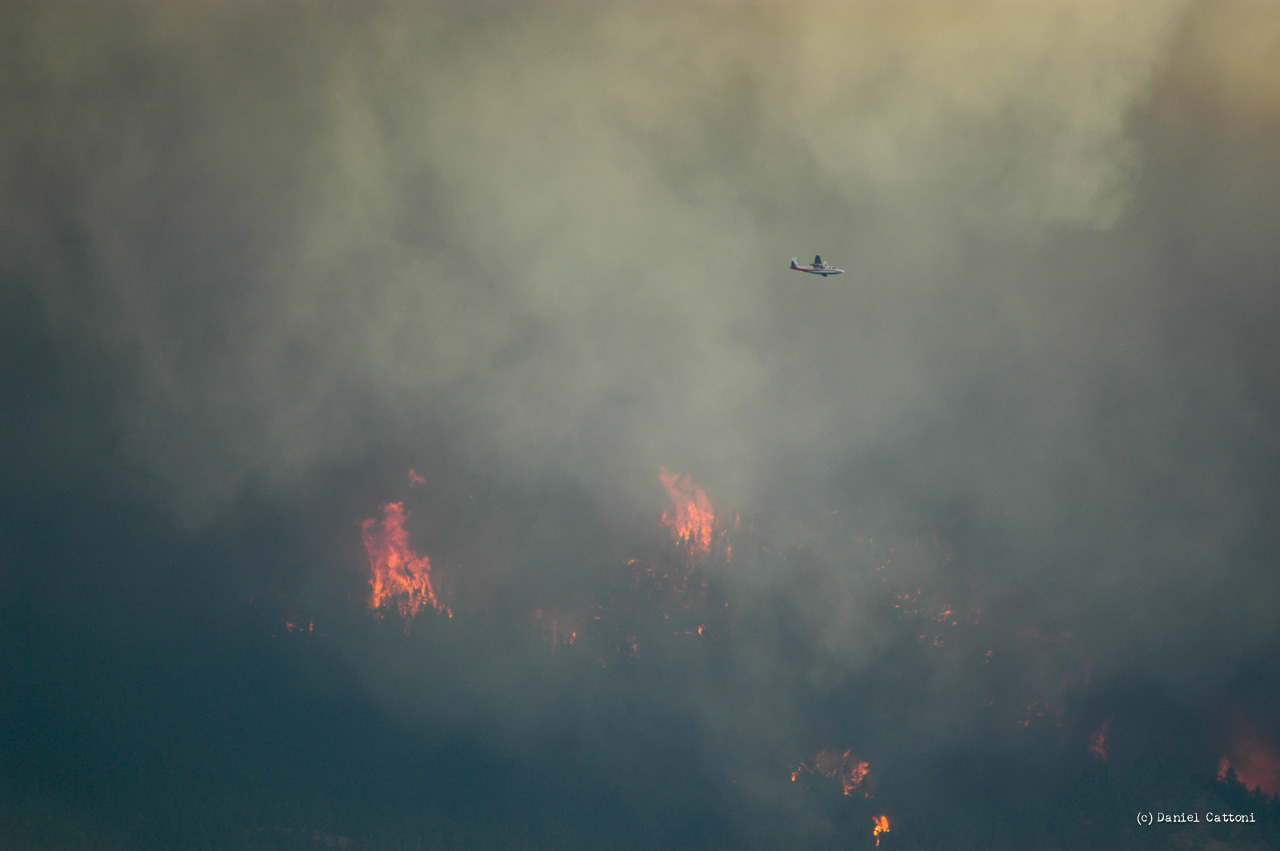 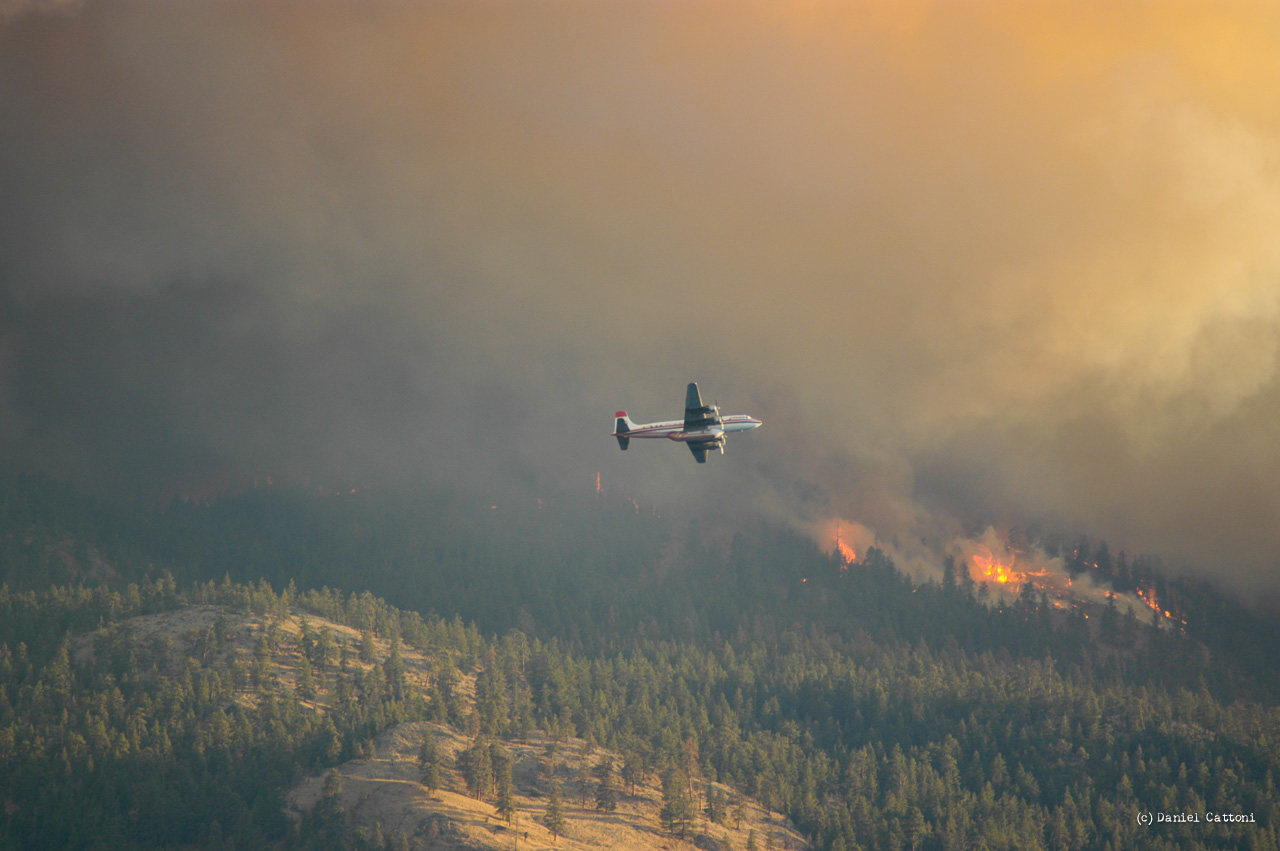 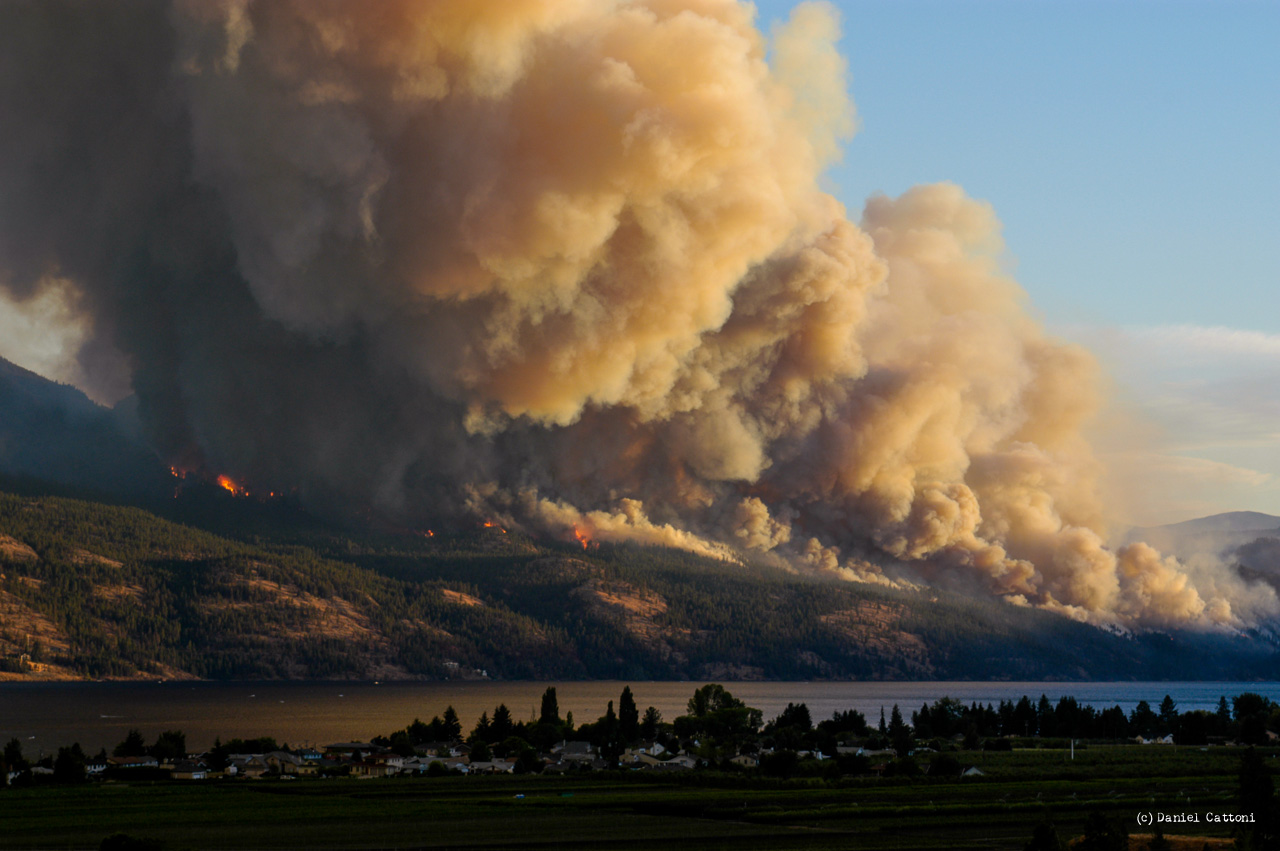 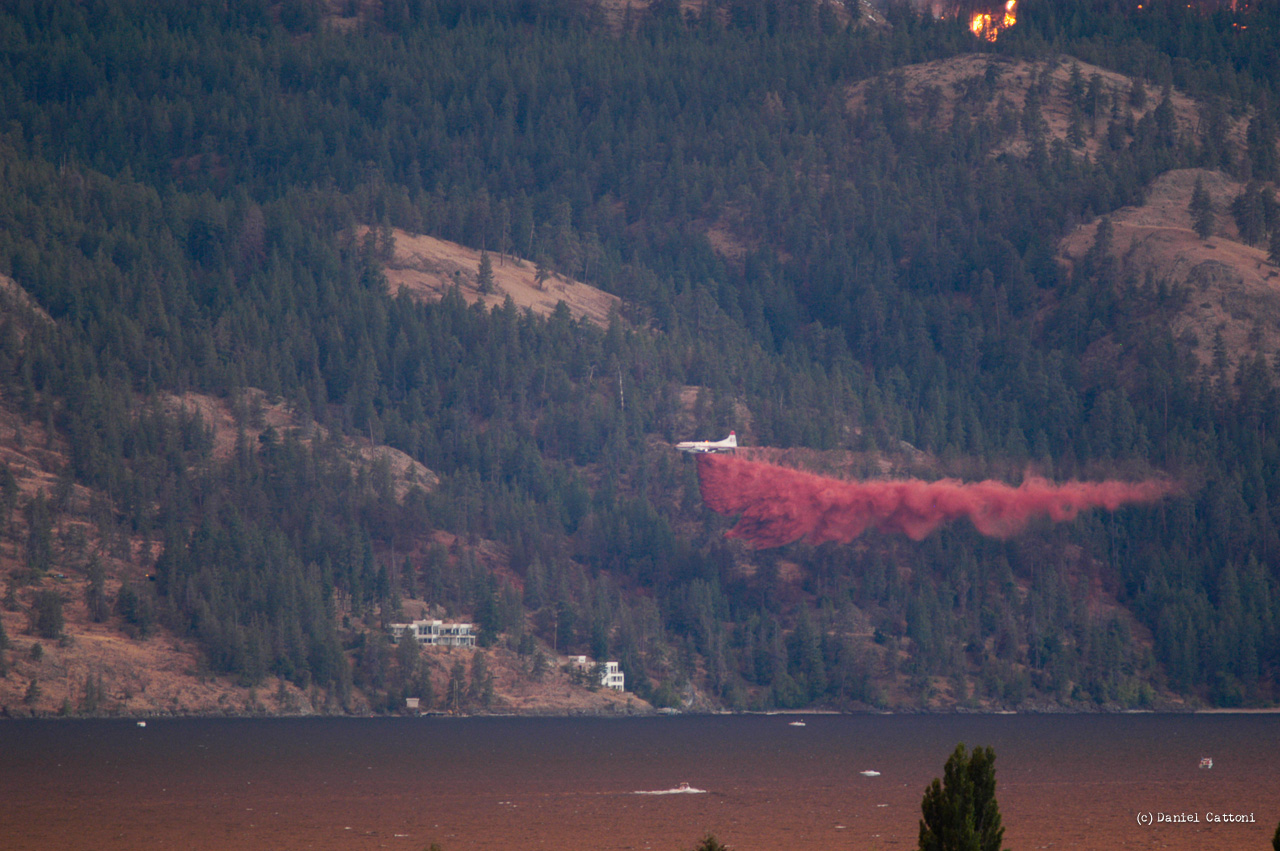 August 18th, 2003 – 18:54 PST
The fire slowly moves toward the first homes. Here, a Convair drops another line of retardant. 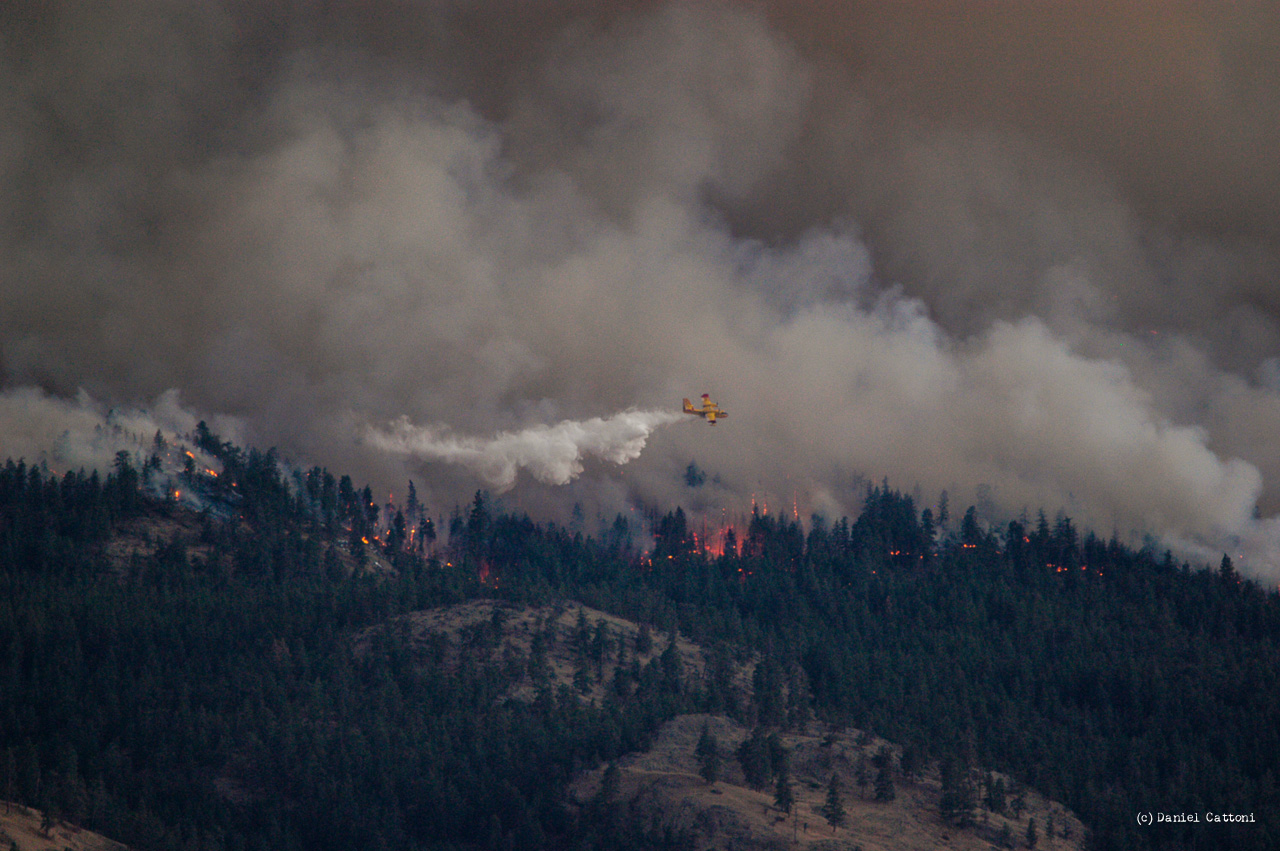 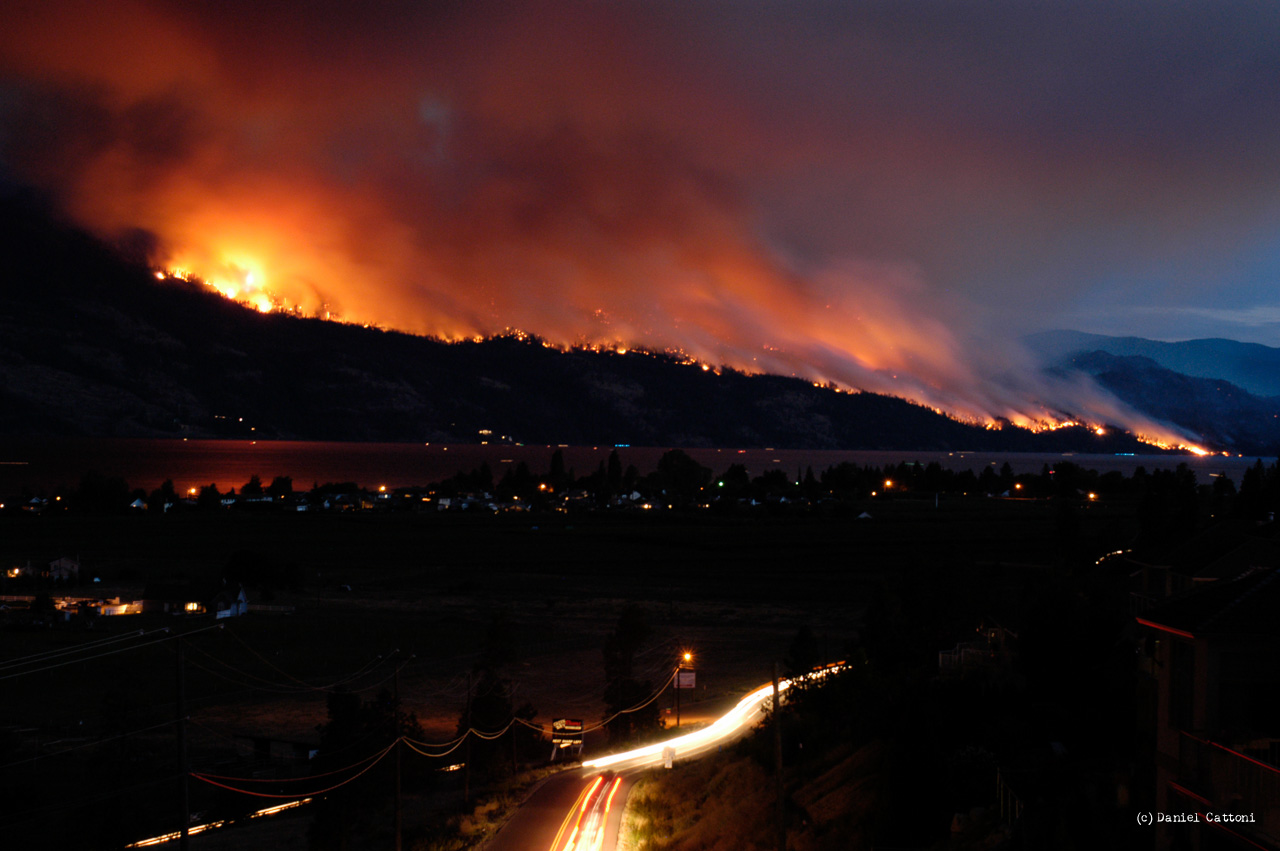 It was impossible to take pictures every day because the smoke was just too heavy too see across the lake. During the previous two days winds increased steadily, pushing the fire at a high rate several kilometres toward Kelowna. The Okanagan Mountain Fire spread at up to 100 meters per minute. Wildfires can jump a distance of up to two kilometres in high wind conditions. 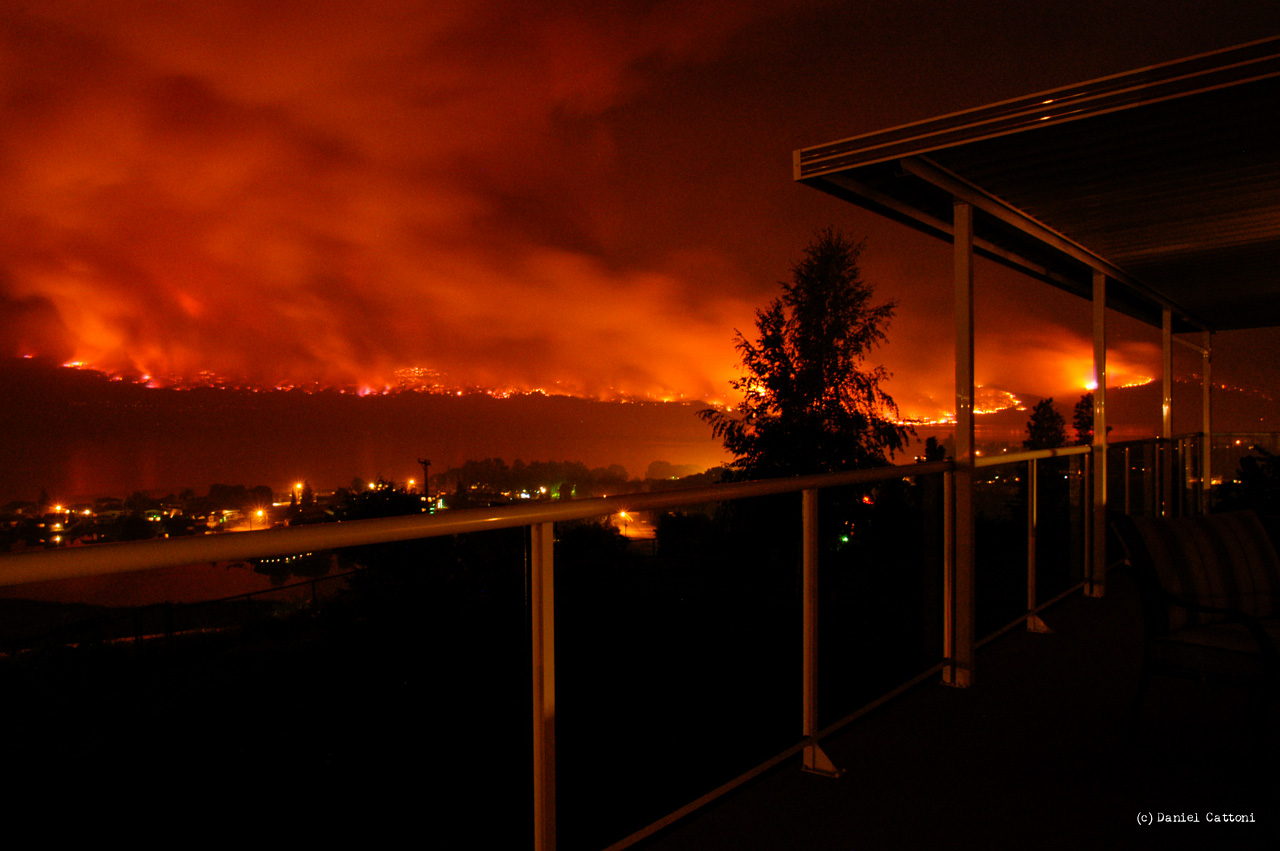 August 21st, 2003 – 20:12 PST
A shot from the patio on the westside of the lake, gives a good impression of the size of the fire. The lake is almost 5 kilometres wide at this location! 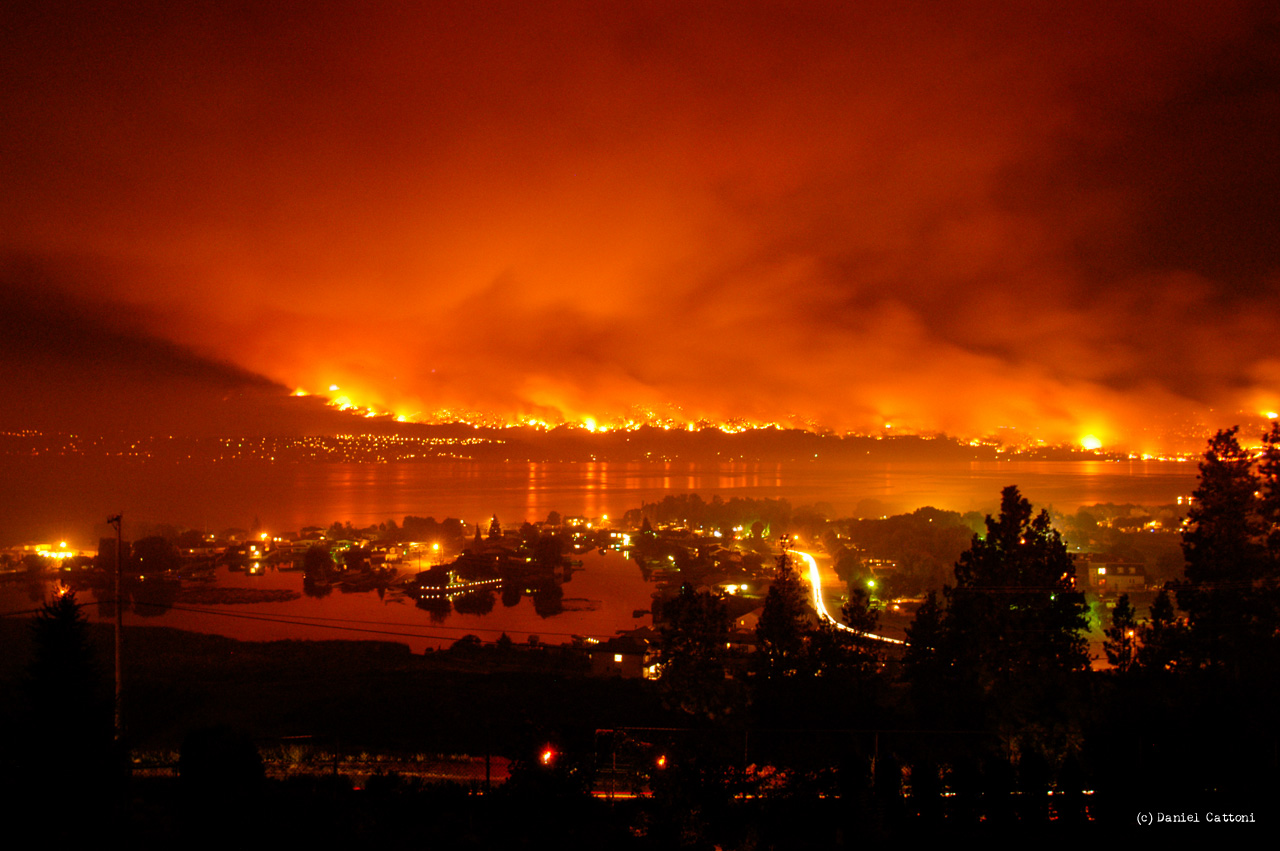 August 21st, 2003 – 20:51 PST
The fire is getting closer and closer to Kettle Valley and the Mission. Green Bay is in the foreground. 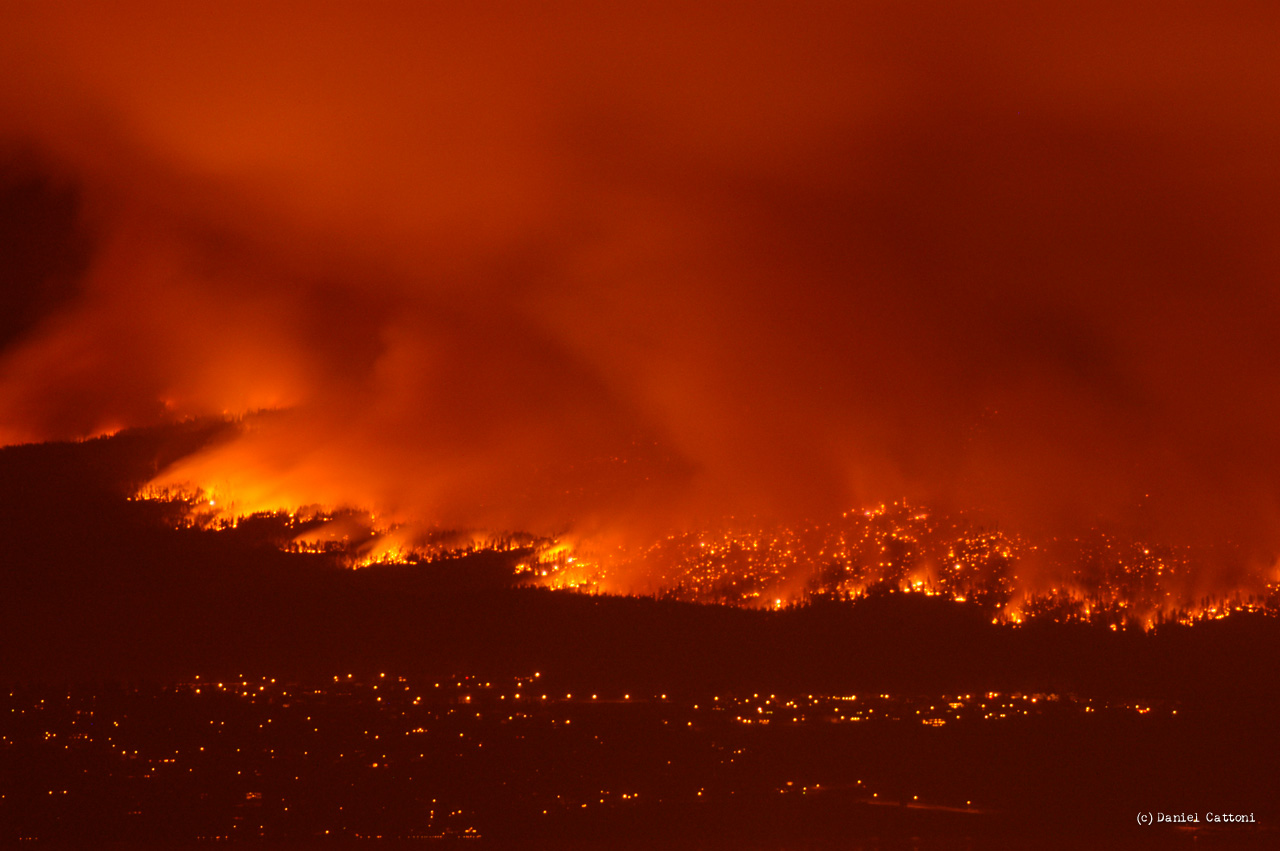 August 21st, 2003 – 21:12 PST
At this time everybody was wondering if the fire could be possibly stopped before reaching all the homes. 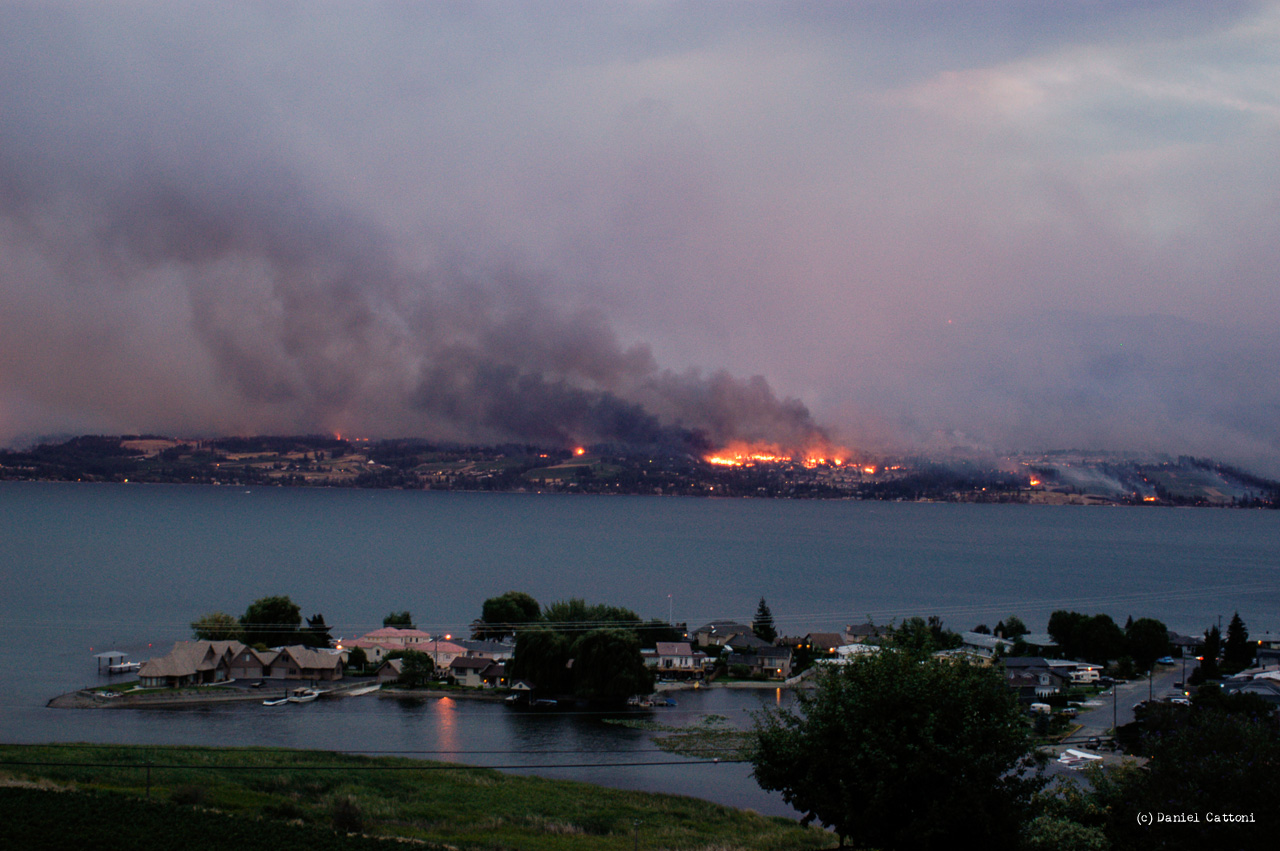 August 22nd, 2003 – 19:02 PST
A shocking view was revealed after the smoke lifted late in the day. Hundreds of homes were burning.

Thick and heavy smoke reduced the visibility to a few hundred feet most of the day. It wasn’t until about 18:40 when the smoke lifted, leaving many of us in shock. We just couldn’t believe nor comprehend what we saw across the lake. The fire had reached the homes and was reducing many of them to a pile of ashes within minutes.

During the Firestorm, almost one third of Kelowna’s 100,000 population had to be evacuated. Despite a great effort by firefighters, the Okanagan Mountain Fire destroyed 238 homes. 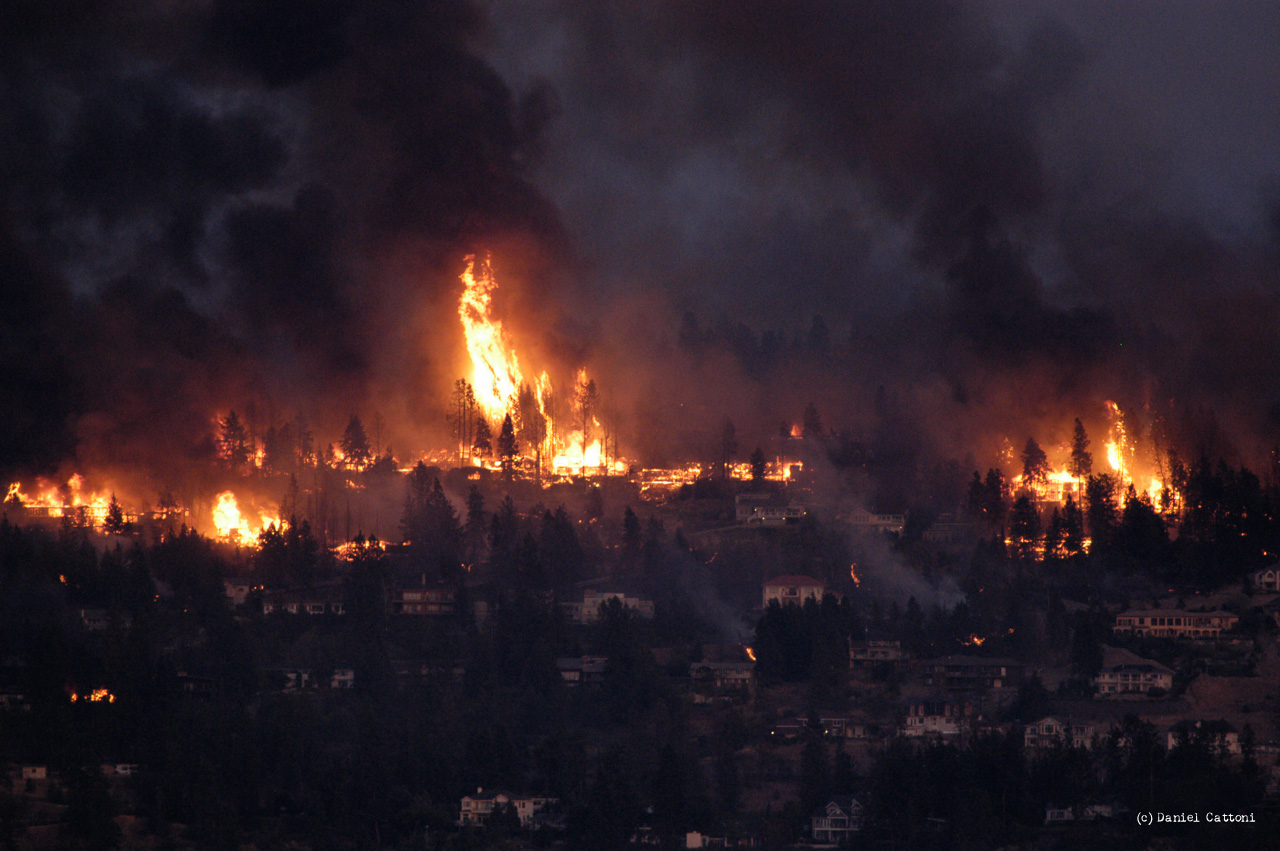 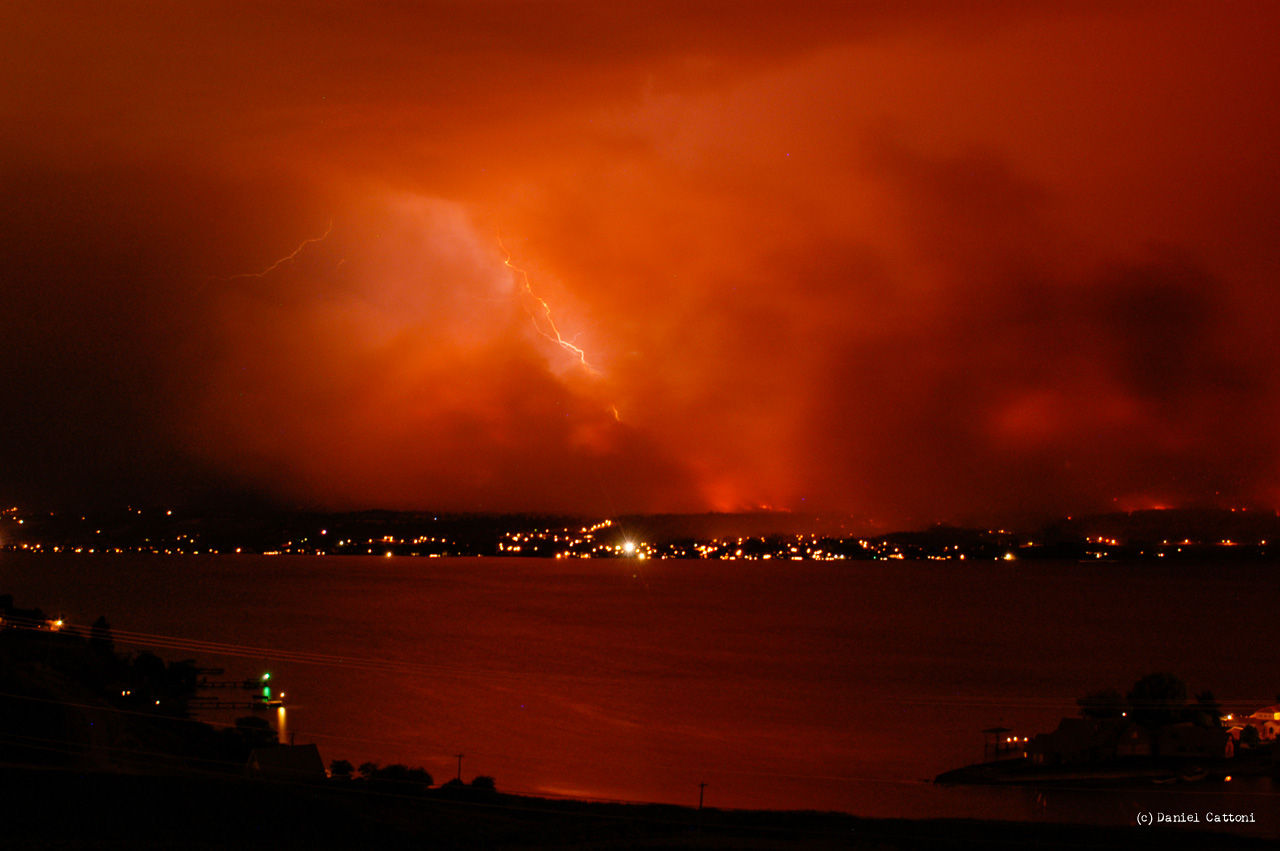 August 22nd, 2003 – 20:56 PST
The fire caused so much heat and updraft that it created its own weather system resulting in some spectacular lightning over Kelowna. 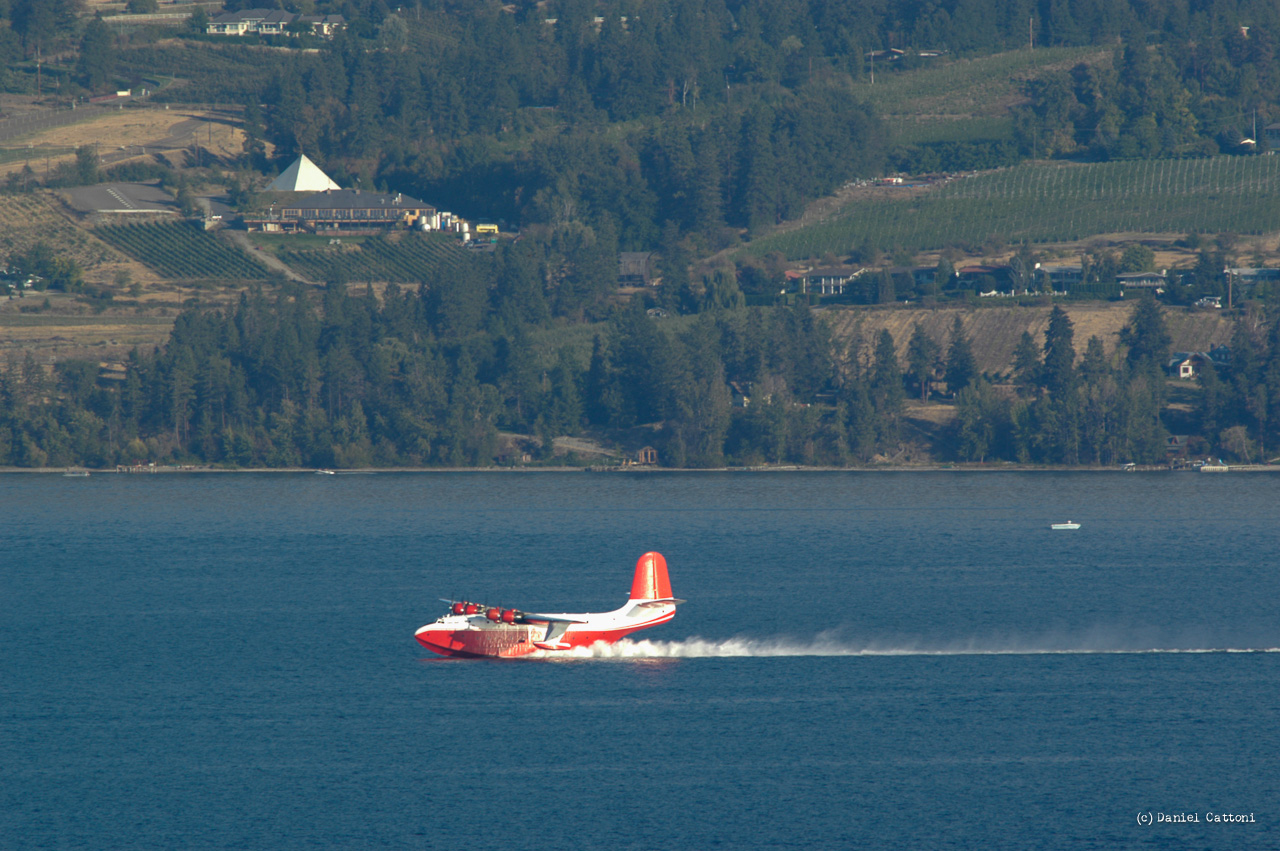 September 1st, 2003 – 17:58 PST
The Martin Mars waterbomber was scooping in the middle of Okanagan Lake with the Summerhill Winery Pyramid in the background. 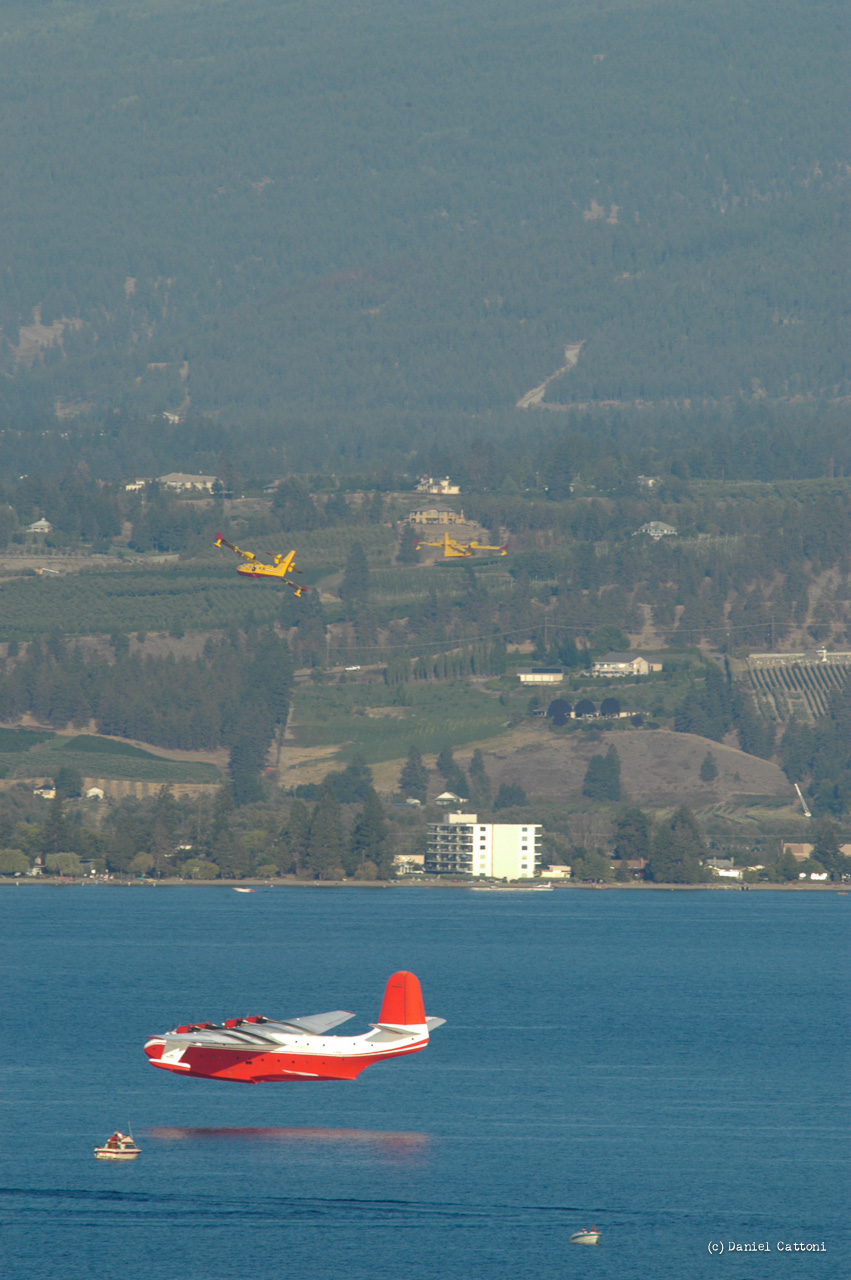 September 1st, 2003 – 18:14 PST
Two CL-415s and a Martin Mars waterbomber were picking up water simultaneously. Some boaters came too close to the aircraft working on the water.

No human life was lost! 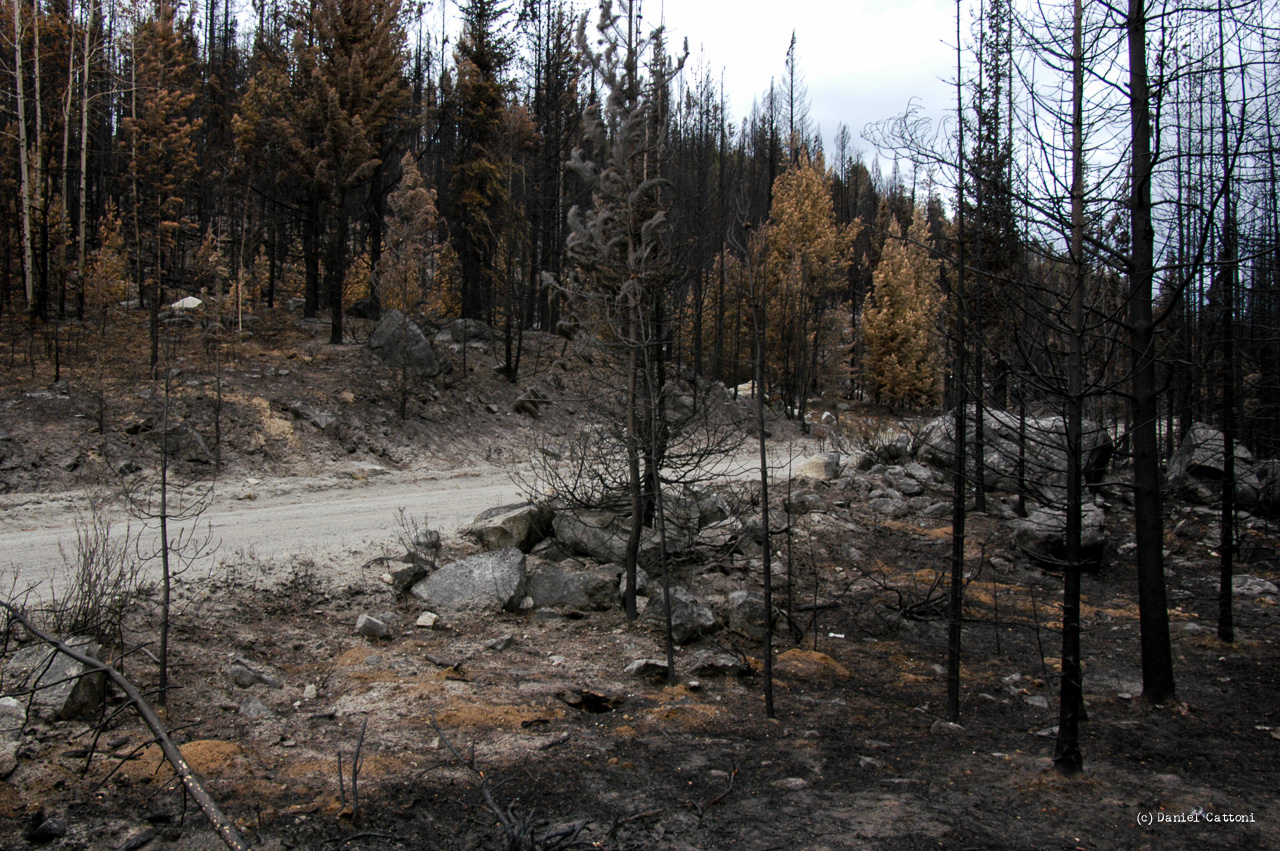 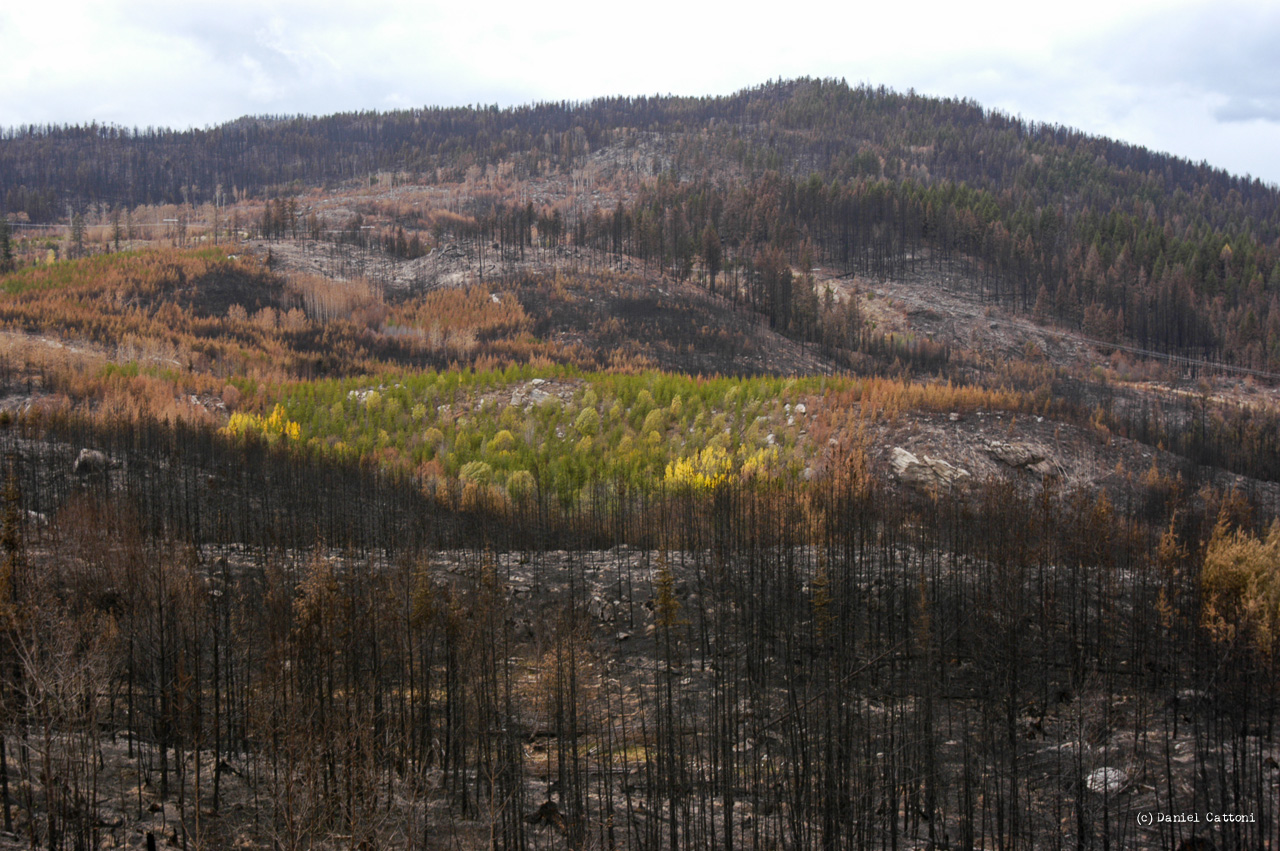 Available for free in eBook format…with even more images!  Get it from the iBookstore.